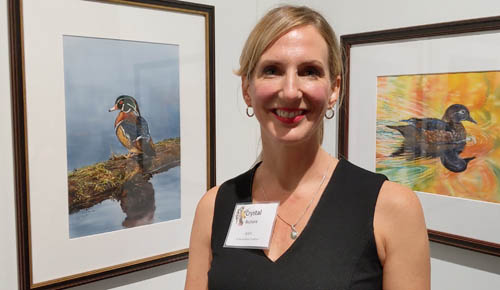 Crystal Beshara was one of the featured instructors at the 2019 SKB Artist Rendezvous & Workshop last Fall, and during the Quick Finish event, we surreptitiously photographed her progress and later asked her to fill out our notes on her painting process. The result is the video and step-by-step demo below.

Materials & Preliminary Drawing
Crystal Beshara works in transparent watercolor. She starts with a 2H graphite pencil drawing on Arches bright white 140lbs cold-pressed paper. The Ottawa artist uses Pebeo drawing gum to mask areas that need to resist pigment. Pebeo’s product is lightly tinted blue-grey so it is easily visible to the artist as she works. Most commonly she uses masking fluid to preserve the white of the paper and underlying paint colors. Beshara explains that the masking fluid, or frisket, is applied on dry paper with a synthetic brush, then once the frisket dries, it can be manipulated, rolled, or skimmed lightly with her finger for textural effects. “Sometimes I roll a slight edge that can pool the liquid watercolor paint; this is great for creating waves or textural effects,” she says. Once the masked and painted area is complete, it can be rubbed away with her fingers or with a rubber-cement pickup. “I should mention that I wet my brush and soap it ever so slightly with The Masters brush cleaner—but any hard soap will do. This protects the bristles with a barrier to make washing the frisket off the brush easier.”

Her drawing is a simple, “strong contour line drawing. All of the major directional lines are sketched in to note changes of direction in the fur. Any changes in color or pattern are marked as well. I don’t want to put too much graphite on there, or the painting could get dingy.”

Like most watercolorists, Beshara works from lights to darks. She starts with the largest areas of the lightest tone. Her goal is variation in values, and color play. “That first wash should be a wet-in-wet wash so there’s an overall softness to the undercoat,” says Beshara. “I am looking for the tones I see in the animal. In that layer I still have to be mindful of the direction of the brushstrokes so it follows the form—the peaks and valleys in the animal’s surface.”

Using the drybrush technique, Beshara places a dark line on one of the elk’s antlers to create a hard-edged highlight. She is careful to put darker colors on the near side of the antler to make that antler come forward, because contrast in values pulls elements forward in the picture plane.

After adding additional tone, Beshara uses a hair dryer to speed up the drying process and allow her to apply a true glaze that will not lift or interfere with that initial layer. In this instance, the artist was painting a Quick Draw, so time was of the essence.

She then rewets the initial layer to prepare a second, soft –but darker—glaze on the elk’s body. “I am starting to get a bit more specific about light shadow, emphasizing muscle tone and form,” she says. Beshara alternates between a large round brush and a fan brush to create texture. “The fan brush stage lasts a while,” comments the artist. “By the time I get to the front again it is only semi-damp so I can add more distinct strokes.”

“Once I believe the overall midtone has been achieved, I remove the masking fluid and make any necessary adjustments to enhance those areas. Then I work on dry areas with a fan brush and fairly liquid paint. I am building distinct first strokes with some of the darkest colors. I want to make sure to not use too many strokes and thus backfill the relatively empty areas that I painted with the fan brush.”

The artist then goes back in with bigger, broader strokes using a fan brush to place the darkest colors in the composition. Beshara then went even darker in spots, which in this case caused a touch of concern among onlookers. She assured them that the strong darks would later be modulated.

Next, Beshara removes the masking fluid that preserved the whites.

Beshara calls the next step “back filling,” which means “tinting the preserved, formerly masked areas to lower their value and amalagate them into the rest of the body, still reserving some of the brightest areas.”

A detail of the preserved white and the depiction of the fur.

Beshara describes her lifting technique: “Using pure water and a stiff damp brush, I soften some of the hard edges created by the masking fluid.”

She then turns her attention to the ears and nose, which will draw the viewer’s eye. “I’m feeling confident that the body is right, value wise, so I now add the darkest features so I can evaluate my value range,” says Beshara.

The water blotch on upper right was a mistake, but Beshara happily incorporated it into an expressive background later. She turns her attention to the elk’s muzzle. “I’m doing a lot of wet-in-wet in the mouth with the darkest, richest values. That is where the expression is in his face, so this is an important step,” says Beshara. She used a rigger brush for this task.

Beshara uses the fan brush to finish the body, continuing to express the texture of the elk’s fur.

Beshara comments, “I’m now handpicking details and individual strokes in the fur with my rigger brush.” The artist also adds dimension and detail to the muzzle of the elk.