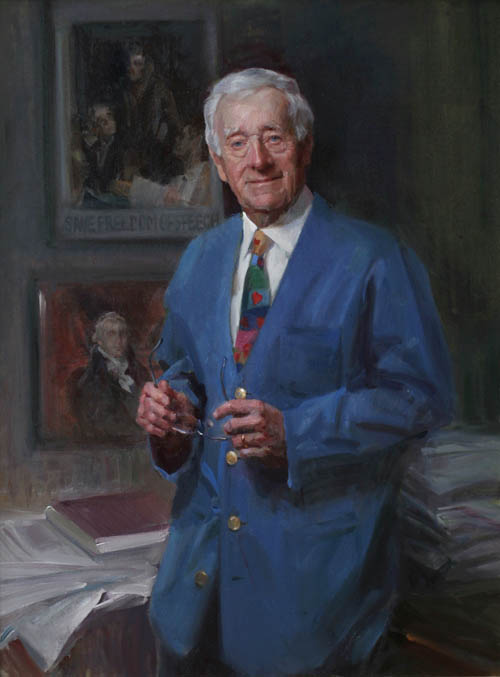 Those who keep an eye on the world of portrait painting are undoubtedly familiar with the work of Michael Shane Neal. SKBers in that world will be thrilled to know that he is one of the featured instructors this September at the SKB Artists Rendezvous & Workshop in Dubois, Wyoming. But while a good chunk of the attendees will be filling his classroom to learn how he paints people, and that will indeed be the main thrust of his efforts, Neal will be offering instruction in other areas as well.

“Portraits will be the focus in Dubois, but I love to paint outdoors, too, so we may take a model outside or even paint a landscape,” Neal says. “The advice I’ve heard is, be an artist first, then apply your technique to something. Working with other subject matter will hone your skills for portraiture because many portraits incorporate elements of still life, or a landscape, or an interior. I love painting them all, but mostly, more than anything, I love painting human beings.”

Neal reports that he’s been a working artist since he graduated from college, and portrait-painting has been his bread and butter. He acknowledges the genre’s challenges but expresses unmitigated love for it.

“Yes, you are dealing with people’s ideas of what they look like, plus your perception of what they look like. Likeness is not measurable. It is very demanding work and tiring, but I cannot wait to do it again, every single time. To me, the unending variety of people, and how much the psyche affects what you are seeing in them, makes portraiture interesting. I can have a sitter come in on January 1 and get a certain feeling from them, then two weeks later they appear different depending on what is going on in their life and how that changes them. Then two weeks later, they are back to looking like they did at first. The challenge is finding how to get the true personality of the person. It takes time. I recently painted the president of the Harvard Club and I said, ‘You have no idea how much I’ll miss you.’ You develop a depth of knowledge about the sitters and become so attached to them as you try to understand them. But like an actor finishing a role, you have to shake it off and move on to the next project.”

Although the majority of portraits painted at SKB have been of wild creatures, human portraiture has been an important component from the beginning of the Susan Kathleen Black Foundation. Key to this has been the friendship and participation of Everett Raymond Kinstler, one of the most celebrated American portrait painters of our lifetime. Kinstler’s wife, Peggy, has long served on SKB’s board of directors, and Kinstler himself attended the Dubois workshop in 2011. Neal considered Kinstler, who passed away last summer, to be his best friend and most important mentor.

One can hear some of the same wisdom beloved by those who knew Kinstler when listening to Neal talk about art. Like Kinstler, he paraphrases the artist Benjamin West when saying a painter should seek the essential character of the subject, not the accidental appearance. Like Kinstler, Neal stresses the value of painting various genres. And like Kinstler, one of the immediate traits you note in Neal is his gentlemanliness.

Neal’s uncanny ties to SKB continue. We asked him if he were familiar with Wyoming’s high plains and mountains, and he replied that he was, largely due to a trip long ago to Big Timber, Montana, the trip when he met Mr. & Mrs. Kinstler face to face for the first time. Neal had been corresponding with Kinstler “as a pen pal,” and Kinstler invited him out for a class, and to paint. What drew them to Big Timber? Jessica Zemsky and Jack Hines. That couple’s painting workshops in Big Timber were a key stop in Susan Kathleen Black’s development as an artist, and Jack & Jessica’s art instruction approach is prominent in the DNA of the Susan Kathleen Black Foundation.

“I’ve been to Wyoming twice so I am familiar with the landscape and how impressive and imposing it can be, but I haven’t spent a lot of time there,” Neal says. “My first meeting of Peggy and Everett was in the Big Timber Hotel. We spent a week painting in a forest with a big group staying in cabins in Big Timber. We painted the model outdoors and indoors, along with the landscape around there; we shared meals.”

Neal recognizes the Kinstler connection, saying that the invitation to be a featured instructor with SKB this year prompted a “quick yes” from Neal. “I’ve known about the foundation for a long time, and I knew that Ray came out for the workshop a few years ago, so I was so flattered to be asked,” he says. “He was always interested in young artists and helping them see and grow, but he followed me closely along the way. Ray was my best friend, my closest teacher, and I admired and respected him. He was not only a great mentor in art but a great life coach. He was a great believer in homework and spent a lot of time in personal study of his subject matter. He loved and understood working with people and building relationships. He wanted to know as much as possible about his subject matter. I believe wholeheartedly in the power of study as well.”

Neither Kinstler nor Neal are parochial about art. When the subject of abstract art comes up, Neal mentions his ties to Will Barnet, a respected New York abstract artist who passed away in 2012. Kinstler introduced Neal to Barnet at a function at the National Arts Club, in Manhattan. “I became friends with Will through Ray,” Neal says. “In his 20s and 30s, Will was making more interesting drawings than Michelangelo. He moved further and further from that, but all of it was so important to how he made his later art. He found his later style only after a lifetime of building on what he learned early.”

One exchange with Barnet still has Neal marveling. “He was so gracious,” Neal remarks. “Once when my work was up, he walked up and told me which paintings were stronger, and told me to study them. He told me to look at my own work and see what is positive in those pieces. I had never looked at my own work to see if a piece can improve the next one. I realized how much you can learn from your own work—both from the positives and the negatives.”

Neal shot to the front of portrait artists at a relatively young age, and he is considered by some to be a modern master. Don’t try to tell him that. Like almost all serious painters, he is dissatisfied with the current level of his work.

“The big leaps in development used to happen to me more often 30 years ago, but they still happen,” Neal says. “I’m more dissatisfied than ever with what I am painting. I feel like you can always be better. Early on you look at your work and you think, gee, that’s not so bad. Thousands more paintings later, you feel less satisfied with what you do. Every year that goes by I am a little more frustrated with what I am doing. You are still working with technique—there’s always that craft, which is so important. But something happens along the way where you use the language of painting that you learned, and you are seeking a unique perspective on a given piece. Now it is fun, because you are using grammatical skills that you gained through experience. You know how to say it.” Ω

Three paintings by Will Barnet, curated by Neal for this post: