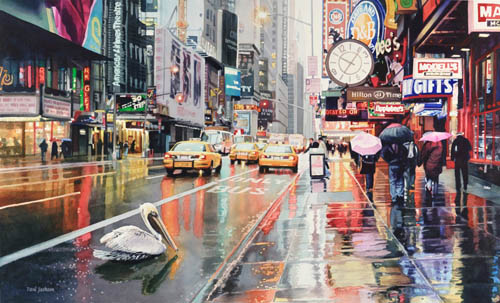 What does it mean to have truth in a painting? Paul Jackson, a watercolorist and a featured instructor at the 2020 SKB Artists Rendezvous & Workshop in Dubois, Wyoming, has a twist on this.

But first, consider this statement from Dr. Lawrence Kimmel, a philosophy teacher at Trinity University in San Antonio, in his research paper “Reality and Illusion in the Work of Art”: “Illusion is essential to art, but also … art is an essential resource of truth.” In other words, the made-up elements in a painting may not necessarily take away from reality. In fact, it may offer more about the truth of the subject than a literal depiction.

The way that Jackson explores this grey area is to make certain objects larger or smaller than life, or placing objects in scenes where one wouldn’t expect them. “I grew up on the Gulf Coast, and birds were everywhere,” says Jackson (and he isn’t joking. His dad kept bald eagles in a flight cage in their backyard). “When I was in New York, everything was man made and I felt like a fish out of water, so when I painted there I put a pelican in the middle of a 42nd Street puddle. And that pelican is me, an odd duck there. The only nature I saw was a bit of the sky above.”

The pelican, a dream or an illusion of sorts, tells a truth about Manhattan by the very fact that it is out of place there.

In his still lifes, objects take the size that Jackson wants them to have, not necessarily their actual size. This actively engages the viewer. “It engages them or at least makes them ask themselves why he did that,” Jackson explains. “The viewer bring something to the art as well. Their imagination needs to come to this painting, too. My goal is to spark a narrative, but not tell an entire story. I want to open up an idea and let the viewers run with their imagination. I like to ride the razor’s edge of the real—make it look real, but a photographic look is never my intent. I like putting illusions into paintings.”

Another illusionary tool in Jackson’s paintbox is the stylized rendering of certain elements. Jackson doesn’t just simplify background elements or supporting actors to push the focal points further forward—he uses stylization to create a mood or atmosphere. Consider the softly painted buildings of Manhattan in Jackson’s “Manhattan Memories.” It helps to note that one of his earliest influences was M.C. Escher, and that the Art Nouveau movement informs his work, especially the art of Alphonse Mucha. Jackson name-checks Gustav Klimt as well, but notes that he doesn’t go as abstract as Klimt.

Klimt makes one think of vibrant color. Jackson has plenty of that on his palette—20 in total, and not a neutral among them. He mixes all his greys and subdued tones. Jackson works both from sketches and from photographic reference he shoots. The artist explains that his decision to go with sketches or photos depends on his intentions—”I am making choices either to get away from reality entirely or to make reality more interesting.”

Jackson says his workshop approach is studio-based, but he will likely give a nod toward SKB’s setting in the Yellowstone ecosystem. “I paint a tailor-made demo at every workshop,” he says, “so in Dubois maybe I’ll paint something from Yellowstone, maybe with a bird in it.”

This isn’t Jackson’s first time in the area. He had a friend who worked as an archaeologist in Yellowstone National Park, and Jackson got to know Yellowstone through him and through a new technology: drones. Jackson says he was an “early adapter” of drone flying, having bought one from China in 2013. He took some amazing photos of Yellowstone with his drone before drones were banned. “I realized that drones would be illegal soon enough, so I flew over everything that I thought would eventually be off limits.”

Call it a bird’s eye view—Jackson would appreciate the pun. Ω