For a moment last April, the 19th edition of SKB’s Dubois workshop seemed on the verge of cancellation because of the pandemic affecting the United States. But the brain trust behind the Susan Kathleen Black Foundation figured out how to present the art education it’s been offering for two decades via the Internet. The result? The 2020 MegaZoom Workshop, featuring more than 20 artists and 52 Zoom sessions boasting more than 100 hours of art instruction. The task of making it work falls onto the usual team of SKBers, but the brunt of the technology and logistics is a task reserved for Anthony Cannata.

Most of the featured instructors for SKB are reasonably savvy in terms of technology—at least compared to the majority of their students. But being a smooth part of the MegaZoom Workshop requires even more tech knowledge. Luckily, SKB has had Cannata on the team for years. Not only does he know the tech, he is familiar with the kinds of issues painters have when they need to film a demo or otherwise present their work digitally.

The scheme Cannata put together isn’t just a great solution to this Covid-cracked year, but quite possibly an arts instruction model that could have useful applications for years. The key to his plan is some proprietary software that mimics the production approach of a TV station—with digital zooming in on details, and jump cuts and fades—and a production assistant for each painting station paying close attention to the words and actions of the painters in order to orchestrate the various cuts and close-ups. Viewers will be able to see the painter’s work surface, palette, and reference photo.

Putting it all together was not, as they say, easy peasy. Cannata surveyed more than a dozen workshop registrants as well as many of the featured instructors to hear their requests, concerns, and contributions to the concept. “Sometimes the teachers wanted one thing and the students wanted something else,” Cannata says. “The teachers didn’t want any cameras in the way, interfering with their usual method of painting. They wanted to concentrate on painting and instruction. But both parties wanted to interact, to communicate with the students. And the students wanted the palette showing, while artists tended to want to jump to it and then jump back pretty quickly. I wanted to be able to have viewers see both palette and painting at the same time. Of course, we can keep the palettes small on the screen until the artist does something special on the palette.”

The production assistants will facilitate the questions viewers will be able to ask instructors via Zoom. Cannata hopes to upload videos of every Zoom session each night of the workshop, accessible to paid registrants on the SKB website through March 31, 2021. At $300, it’s a heckuva deal. But it didn’t come easy. 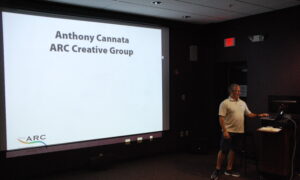 Cannata runs a business with David Rankin named the ARC Creative Group. Here, he presents to attendees at the TexArt event in Fredericksburg, TX

Cannata first had to figure out what equipment it would take to run the MegaZoom Workshop. “I had to go through five or six different software programs to find the best match for what we are doing,” he recalls. “Then I had to find the right camera. A lot of the webcams were gone from Amazon because people where buying them for Zoom meetings at home. I was looking for cameras that were fixed focus, because when you are watching people paint, every time the painting hand moves it makes the camera refocus, and that can be really annoying. I found 10 I wanted to try, I liked six, returned the rest and then I must have spent 40 hours finding the right part for each issue that comes up when filming a demo. I tried different cameras and different focuses, SLRs, digital camcorders… ”

Finding the right equipment is one thing. Making it play nice with a program such as Zoom is another thing. “Unfortunately, there is no one to talk to at Zoom,” Cannata reports. “It’s basically, ‘Figure it out on your own.’ I found what I thought was appealing in a camera, but the trick was making all that work on Zoom.” Cannata wasn’t quite finished with his equipment prep. He needed to find computers that could run it all, and he needed to test it.

Check, and check. “One of my computers I won’t use, because running multiple cams gets it too hot. It’s a lot of work for a computer. I tested fans to see where to place them—on the side of the computer, underneath, on top…” A trial run at filming a demo at David Rankin’s house proved successful, with those attending enthusiastically endorsing the setup.

As this is being written, Cannata is finishing his preparations. He reports a bit of insomnia as he worries about what all could go wrong, despite his efforts to predict every possible problem. The Cleveland marketing guru, armed with 1,000 feet of wire, plans on hardwiring the two camera stations at Headwaters to try to avoid WiFi issues. “My sanity will only let me do two demos at a time, live,” Cannat says. “The remote ones … I can’t control what they are doing. We gave them ideas on how to set it up and do it.”

It’s an amazing opportunity for those folks who usually travel to Dubois but can’t this year, plus all of the folks who never could make it, but always wished to. The attendees who will still gather at Headwaters may get the best instruction of all, because they will be able to attend the sessions in person or watch both the Headwater sessions and the remote sessions projected on the big screen in the main room. “It will be even better than ever,” says Cannata. Ω